by Poppy Reid
In a dark, fifth-floor hotel room at The Sheraton in Sydney, Marilyn Manson is talking about grammatical preferences and Trent Reznor, completely unperturbed by the thick ring of cocaine settled in his left nostril. “I used to do this for a living.” Indeed he was a music journalist; in his adolescence after a three-week course at a community college in Florida, Manson, now 43, used his writing capabilities to hook up an interview with Reznor. But while discussing Nine Inch Nails, Manson used the opportunity to whore out his demo cassette. “I sort of forced myself onto him,” he says while flattening a piece of hair onto his white painted cheek. His place under Reznor’s wing was integral to Manson’s ensuing record sales of more than 50 million, and the creation of an underground martyr, who is as celebrated as he is despised.

Sitting with his knees towering over a small coffee table in knee-high platform boots, Manson is twelve hours out from his third live show in three years; a presence Australia has Soundwave festival to thank for, but a performance which left a bad taste in the mouths of those who know the potential genius of this man. “It was a great challenge trying to make a return to the world and a comeback into yourself as a music artist,” he says pointedly. “I’m having fun. I thought it was great.” 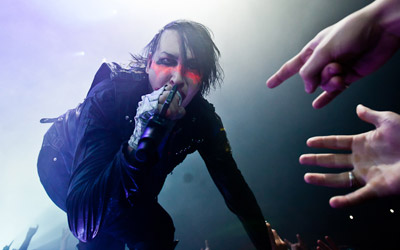 With the release of a brand new single just days away and eighth album Born Villain set to drop ‘soon’ (on legendary label Cooking Vinyl), Manson has adopted the demeanour of a resolute newcomer. He seems to have put aside the full knowledge of his worth and tethered his place in pop culture to the mantra: you’re only as good as your last work.

“[Born Villain] felt like making a first record because I went in with only ambition and only the confidence and determination to impress people that heard it for the first time,” he says. “Knowing that there might be people that have never heard my music and without being arrogant or ignorant knowing that they’ve heard it already.”

In a lot of ways, Marilyn Manson is a fictional character. Beginning as such 22-years ago when a 21-year-old Brian Warner created what was intended as a comment on pop culture, Manson fast became the wearer of epithets like Satanist, murderer and sociopath. “I had intended to get to where I am but I did not know the toll that I would have to take in the process,” he admits. “But at the same time I knew what I was getting into.” A man who has the balls to release an album titled Antichrist Superstar in a time when America’s church and state were vehemently and publicly opposed, certainly knows what he’s getting into.
“Marilyn Manson has always been a statement of the whole concept of celebrity, or popularity or the idea that Marilyn Monroe and Charles Manson equally can share the cover of LIFE magazine. Either way a lot of people don’t see that Norma Jean Baker was her real name and Charles Manson [real name Charles Mills] was a fake name too... It’s very unusual to be in a position where I already knew, or had the conviction to achieve what I would become as a part of pop culture, so I would be able to change it from within.”

Yet here he is, on the brink of a thirteenth world tour, requesting his adoring minions to dust off their dog collars and buckled boots and wear proudly the scars that lead them toward his music in the first place. The legacy he is still tailoring is indisputable; among his projects Manson now includes applauded film and art - even Born Villain spawned a squeamish short film directed by actor Shia LaBeouf. Manson understands the weight of his establishment as he remembers it was all an upshot of misplaced journalism and a homemade flyer copied at Kinko’s that he stuck to a slew of windshields.
“I didn’t have any songs when I made the flyer. People came to my show. So in a metaphorical sense, why was I selling the flyer? I could have chosen to go into advertising, or I could have chosen to realise that I’m not capable of limiting my expression to simply making a song. Limitations create much more ambition.” 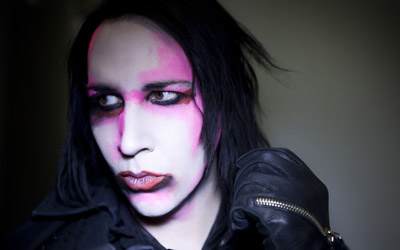 Even today, Manson carries with him the ramifications of ambition. Condemned by Christians, parents, governments and anyone with a right-wing sensibility, it may have come as a shock to most when his country turned against him after the 1999 Columbine High School massacre but, in the undeniable way life sometimes tends to lean, the only person not surprised was Manson himself.

"At that point, fifteen years ago or so when everyone wanted to kill me, literally, when I had hundreds of death threats a day - which I’m sure probably didn’t make anyone that was around me feel comfortable - I just had to decide, ‘Would I die for what I do?’ That’s not being a martyr, that’s just being decisive and being certain about ‘Is this what you believe in?’ Because I had to believe in something.”

Up until the point when the FBI began tapping his phone and his life was threatened, Manson relied only on himself to defend his name, and as America nears the 12th anniversary of the shooting, that period remains the only occasion where Manson has used a publicist.

“It had really affected my career,” he grants. “In some ways I feel cheated because I don’t get credit for all the shit that I went through before it.”

To his credit, Manson acted amicably. This was partly due to his expectations of the US, which was portrayed quite well in his fourth record Holy Wood (In The Shadow Of The Valley Of Death). Not only did the album make a vivid statement about the very thing he was accused of but its release coincidentally corresponded with the shooting’s aftermath. Jumping from topic to topic with little to no steering, Manson begins to discuss what he refers to as his “sad era.” Intriguingly, the catalyst had less to do with his collapsing marriage with burlesque dancer Dita Von Teese and more with the death of gonzo journalism pioneer Hunter S. Thompson.

“I learned a lot from him and him dying became the era of me being kind of lost,” says Manson mid-monologue. “He was almost a mentor to me in a strange way and I don’t even know how he came into play. I became very self-destructive, then I went through a period where I made a few records. My last two records were where I was uncertain of who I was. I was trying to find myself.”

In fact, Manson views those records (2007’s The High End of Low and 2009’s Eat Me, Drink Me) with such pain and disconnect he refuses to play any of their tracks on this current tour. “Those two records where it was more romantically related, that era is more depressing than the previous era [the Columbine wake],” he realises. “It’s kind of unusual to think about it that way, and I’m only now coming to this conclusion as I’m sitting here saying it to you.”

It’s not surprising the inspiration for Manson’s next offering will come solely from within. Using a collection of references to Macbeth and French poetry collection Les Fleurs du mal (Flowers of Evil) by Charles Baudelaire, weaved in with his ever-present kinship with guns, (or the female pistil of a flower), Manson takes a clean slate approach to understanding the portrait he has become.

“It’s about being given this position of being thrust into the spotlight as a king or an actor,” he explains. “How do you deal with it when you don’t know if you believe in it anymore?” Manson outwardly questions his worth numerous times during his talk with TMN, at one point he even paraphrases Shakespeare: “Poor player that struts and frets onstage is full of sound and fury. Signifying nothing.” His point is clearly open to interpretation, just as he intends, but just as Bowie and Placebo cribbed ideas from George Orwell’s 1984, Manson is content questioning his part in his own tragedy. 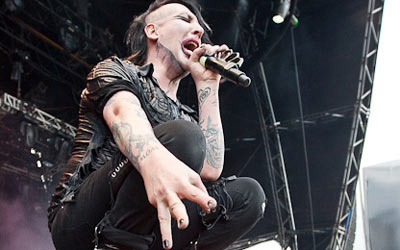 The materialising of Born Villain also took Manson down a new path. A year and a half ago he placed all his belongings (sans books, films, paints and recording devices) into storage. “I moved into a place that’s very much like this hotel room aside from the bad art that’s on the walls,” he gestures to the oil painting in the adjoining room. “While it was very Patrick Bateman, American Psycho with the starkness of it, I had to fill the room with something, metaphorically and literally.”

Perhaps one of the only reminders Manson proffers that he’s still aware of his rockstar status (apart from the smeared lipstick and top-to-toe leather), is the way in which he recorded the new album. Among a room full of peers and potential love interests, he bled out into the microphone.

“I do things differently than when I’m isolated. I had a little bit of that in my head knowing that if I have people in the room that I want to impress - which generally are girls, I will admit, who I was trying to seduce or romance - I tend to be much better at my job.”

This kind of talk is what will reinvent the man, after more than two decades of shock value, Manson isn’t about to lose any of his disquieting carriage. But his fervour to impress new fans and repossess the rawness he dispatched with 1994’s Portrait Of An American Family, is an insight into the humility required by any superstar, antichrist or not.

“It sounds like the exact record I’ve wanted all of my heroes to make at this point in their career and sometimes they don’t. I might have [previously] had that off-period, in my opinion, but this is the one that punches you right in the stomach.”

Later, as he rounds the corner to the hotel floor’s lift he shouts, without looking back, “Make sure you describe me as handsome! And charming!”